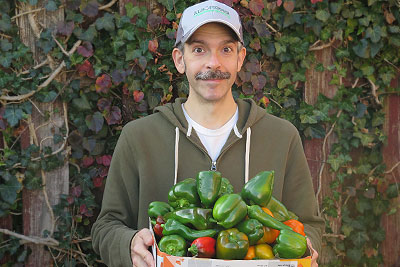 I was sitting outside with my Dad on his back deck. It was a cool Memorial Weekend. Among other things, we began talking about gardening. Before I knew it, we were walking across the road to visit a neighbor who was selling vegetable seedlings. We filled up our old Radio Flyer wagon with trays and thus began a turning point in my life.

I tossed some broccoli and pepper seedlings into my car and journeyed home. Soon thereafter reality set it. 'What am I doing!? Where will I grow these things? I'm a renter. What options do I even have???' Can you grow vegetables in containers? Perhaps that might be the solution!

So I bought four 2-cubic foot plastic pots. I picked up some Miracle-Gro potting mix. And thus it began... my first tiny Urban Garden! I placed the pots on the lawn and would then move them every day or two so as not to kill my landlord's grass. Simultaneously, I put a few pepper seedlings into the landscape beds, strewn between a rose and some holly bushes. No proper fertilizer. No compost to speak of.

The in-ground peppers were so nutrient starved, I'm amazed they even bore a single pepper. Meanwhile, the MG potted peppers grew like crazy! This synthetic, chemical laden, potting mix gave me just enough success to feel excited! Sure, I got a crash course in BER. And of course I would labor everyday, trying to keep them watered. But having that first taste of success was enough to permanently convert me.

Going forward, each setback became a challenge. An obstacle to overcome. A problem to solve. I've never stopped growing peppers. They've become sort of a mascot for me. But, I've certainly tried lot's of different ideas. Every year I try to push forward, experimenting and always learning more.

This playlist documents the last few years of my urban gardening walk-throughs.

It's kind of fun seeing how things have progressed. What's in store for next year? Subscribe to my YouTube channel to find out!