Do Plants Use Green Light?
Why Are LEDs Purple???

Some LED light sellers falsely claim that plants don't use green light for photosynthesis. LED lights in our homes are highly efficient, but they produce white light. On the other hand, looking into grow lights, it has been common to see multicolored lights. These lights mainly use a combination of blue and red diodes, making them appear purple or "blurple" as some say. Are those light better for plant growth? Or should we use white light for grwoing plants?

It's easy to find modern LED grow lights claiming to be full spectrum, giving off white light. But there are still pink or purple LEDs intended for plants. They lights have combinations of blues and reds, boasting a finely tuned plant spectrum. Are these blurple LEDs more efficient? Is white light wasteful when growing plants? Or do plants actually use green photons for photosynthesis?

How Plants Use Different Colors of Light:

Why Do People Say Plants Don't Use Green Light?

PLANTS ARE GREEN: THEY REFLECT LIGHT! The story begins with chlorophyll, the key compound that drives photosynthesis in plants. We have chlorophyll-A and chlorophyll-B which are most effective at absorbing light in the blue and red sides of the visible light spectrum. It seems to make sense that plants don't use green light. Chlorophyll is green, just like many plant tissues. And so rather than absorbing the green wavelengths, it reflects that light. Thus, it might seem that green light is wasted light -completely unused and even unusable by plants.

Chlorophyll charts are often improperly used to show that plants don't use green light. McCree, 1972 1 shows this is false.

GREEN LIGHT WON'T DISRUPT LIGHT CYCLES: Many growers are aware that green light will not disrupt photoperiods during a plant's night cycle. Some plants are extremely sensitive to day length, known as either long day or short day plants. Flashing them with light during their dark period can disrupt their natural biorhythms. However light bulbs that produce purely green light will not disturb a plant's photoperiod.

This has caused some to assume that plants will barely use green light. Some have falsely claimed that "green light is one of the only spectrums of light that plants don’t photosynthesize". As McCree had demonstrated many decades ago, plants DO use green photons for photosynthesis. Plants simply don't use green wavelengths for determining day length.

HOW THE PHYTOCHROME SYSTEM WORKS: The phytochrome system is used by plants to keep track of light and dark cycles. Phytochromes are chromoproteins that absorb either red light: Pr (~667nm) or far-red light Pfr (~730nm). This system also helps plants to determine if they are below a heavily shaded canopy. Green light doesn't directly impact these special receptors. But that doesn't mean it won't drive photosynthesis.

Time and again, researchers have demonstrated this to be a false assumption. For example, "in spinach, the quantum efficiency under green light was about 10% lower than that for red light, and for blue light it was about 25% lower compared to red light." 2 Interesting isn't it? Although green light was less efficient than red, blue was even LESS efficient!

Is Green Light Wasted Energy or Do Plants Use It?

Early experiments with algal suspensions have highlighted the action of blue and red light 3 in photosynthesis. But this research does not represent the more complex plant systems that grow on land and in our gardens. Such plants have leaves and a layered canopy. So what happens to green light shining on land plants?

REFLECTED LIGHT: Some of the green light that shines on a leaf is reflected. Thus we see the green coloration of that plant. This might seem like wasted energy. But not when we account for canopy penetration. Reflected light is scattered and passed on to leaves that are lower down on the plant.4 This reduces die back (senescence) of lower leaves, allowing them to get at least a portion of light.

ABSORBED LIGHT: If we look at a cross section of a plant leaf, we find that most of the blue and red light wavelengths are absorbed in the upper layer.5 Although some green light is reflected, a portion is also absorbed by accessory pigments. In addition to chlorophyll-A, plants have carotenes and xanthophylls. These are able to expand the absorbable light spectrum,6 harvesting some of that green light for photosynthesis.

LIGHT PENETRATION: The upper (adaxial) layer of a leaf's surface harvests mostly blue and red wavelengths. So how do the plant tissues in the bottom portion of the leaf get any light? That is where green light comes in. It penetrates deeper, being transmitted throughout the leaf.7 Travelling a long path, green light is reflected many times inside of the cellular structures. Thus green light serves a vital role in driving photosynthesis in the lower portions of a leaf.

Why is Full Spectrum Light Better For Plant Growth?

Despite the many online sources that state otherwise, research has shown that green light can grow plants and that it serves a beneficial function.8 However, just because something is beneficial, that doesn't mean it is essential. Many low end LED grow lights offer a spectrum consisting of a few "essential" light wavelengths.

This old low watt LED grow light from 2011 was blurple, having only 3 diode colors.

Each wavelength is referred to as a band. Depending on how the colors are generated, each band may cover a narrow range of color, perhaps 25nm. Most commonly, manufacturers will combine one or more blues with two or more reds. These have been demonstrated to support the basic development and growth of most plants.

At the same time, other bands of color have been shown to impact plant development and/or health. UV light has been linked with improved disease resistance.9 And as mentioned earlier, green light does serve a function as well.10

This lettuce experiment demonstrates the effects of different colors on plant morphology.

Why Are LEDs So Efficient for Plant Growth?

LED light sellers paint a picture that colors outside of the chlorophyll reactive range are useless to plants. But that's not the case. Why are custom LED grow lights so efficient? Custom spectrum is only a portion of the equation. Much of the advantage deals with efficacy and efficiency of LEDs as a technology.

HPS lights are placed higher above plant canopies for even light distribution while more photons are lost at tops & sides.

EFFICIENCY: This can encompass a broad range of factors. But one excellent example deals with the directional nature of LED light. In a fluorescent or HID system, the bulbs emit light in all directions. More than half of the light may shine upward, away from the plant canopy. To improve efficiency, reflectors are used to bounce those photons downward, back towards the plants. LEDs are more efficient in this regard as their light can be focused directly onto the target area.

ELECTRICAL EFFICACY: LED efficacy is a more specific term. It is a measure of how much light is produced per unit of energy. Consumers might be familiar with lumens per watt as a gauge for efficiency. In horticulture, you can compare the amount of photons emitted as micromoles per joule. But the bottom line is, LEDs are outpacing many other lighting solutions. They are becoming extremely effective at converting electricity to light. And that's the biggest reason to switch to LEDs for plant cultivation.

Why Did LED Grow Lights Use Red & Blue Diodes?

COLOR LIMITATIONS: Here's the interesting part of the story. Not all LED colors are rendered as efficiently as others. Each color band has its own unique material used to create the desired wavelength. Some of these colors require more power than others.

Blue and Red LED lights have shown the highest efficacy of all colors. As of 2017, Cree XLamp diodes were leading the industry with very high numbers.11 The XP-G3 Royal Blue (450 nm) were rated as high as 2.80 µmol/J. And XP-E HE Photo Red (660 nm) achieved up to 3.18 µmol/J. However, using phosphors to create white light (4000 K) causes an overall reduction in efficacy (2.29 µmol/J). And then there is green light...

THE "GREEN GAP": Green LEDs are low on the efficacy list12, requiring much more energy per unit of light. The technology is less advanced than blue and red LED colors. Fortunately, LED manufacturers been able to add a phosphor coating to highly efficient blue diodes.13 This process has shown excellent results yielding a broad spectrum white light with high efficiency at a low production cost. Even still, the electrical efficiency of LED generated green light is still lower than blue or red. This is a big reason for why it hasn't been included in many grow lights.

Researchers have known for decades that green light is useful for plants. But conveniently for LED makers, people have become fixated with the chlorophyll absorption spectrum. -A spectrum that has spikes in the general areas where LEDs are most efficient.

Why You Should Use White LEDs for Plants:

It's true that green light is slightly less effective than red at fueling photosynthesis. But that hardly makes it useless. There is more to plant growth than energy production. Photomorphogenesis is also an important concern. This deals with the way plants grow and develop in response to various frequencies of light.

For example, far-red light can play a major role in plant development.9 Specifically, the ratio of red to far-red can signal plants to grow in an elongated fashion. This is a morphological response to plant competition in closed canopies.

Then there is UV light, which is gaining interest due to its potential to bolster plant immunities. The 280nm UV LED diode is the least efficient of any LED color. But other UV diode colors are much better in this regard. The 375 to 405 nm range of UV diodes is nearly as electrically efficient as standard 450 nm blue. And these are the wavelengths that have been recognized to be beneficial for plants. As a result, some high end grow lights now include them.

What about green light though? Much of the growing community was in the dark when it came to the effects of green light on higher plants. But advances in LED manufacturing have brought down cost while boosting system efficiency. This has led to more interest in neglected wavelengths. Growers have observed excellent results by providing green photons to their plants.

My latest, preferred LED grow light solution has a broad white spectrum while being ultra-efficient!

Many years ago, my first LED was very low wattage, with only 3 color bands. But by pairing it up with some beefy CFLs, I got some decent results. Of course, CFLs have a much lower efficacy than LEDs. And since that time LEDs have come a tremendously long way. It is now very common to find LED grow lights that include a much broader spectrum of light. They may include some standard red diodes. But there are additional phosphor coated blue diodes. These produce a nice white light that is much easier to work around.

Growing your plants under clean white light is a much more pleasant experience!

"Blurple" LED grow lights make it very difficult to monitor your plants. This white light LED is MUCH easier to look at. And it's also extremely effective at growing large, strong plants. The green photons are not "wasted". They are absorbed by your plants, penetrating deep into the tissues and fueling plenty of growth! 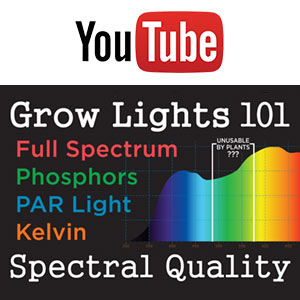 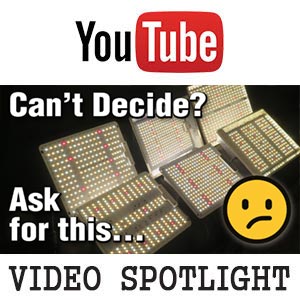