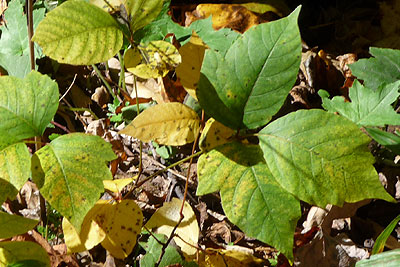 You want to spend your time picking tomatoes and munching on beans from your garden. The last thing you want is a painful, unrelenting rash that pushes you to the brink of insanity! Learning how to identify poison ivy and then eliminate it will be time well spent.

Want to safely keep your property poison ivy free? This video will show you how.

How does poison ivy exposure occur?

DIRECT EXPOSURE: The primary method of coming in contact with urushiol oil is by common in direct contact with poison ivy, poison oak or poison sumac plants. This can happen while intentionally removing it. Or it can happen incidentally while weed eating the lawn or weeding the garden. The oil resides inside of all part of the plants. You can get it from touching the leaves, stems or roots.

INDIRECT EXPOSURE: As a secondary line of exposure the oil may be transferred to other objects and then transferred to your skin. Urushiol oil can stick to the fur of animals, like dogs and then get on your skin when you pet them. It can get on your tools, where it remains for a long time until finally it rubs against your skin. It can contaminate work gloves or the soles of boots. Whatever the case, once the oil touches your skin, it can still lead to a reaction, even if you were never in contact with the plant itself.

AIRBORNE EXPOSURE: Some people have the misconception that poison ivy reactions will occur if you simply come too close to the plants. They may fear that being down wind from poison ivy can result in a severe reaction if your are sensitive enough. But the oil doesn't spread in this fashion. There is one way in which poison ivy CAN pose an airborne threat though. It should never be burned. This would release oil particles into the air which can be extremely dangerous upon exposure.

THE TOUGH GUY: Do you know one of those guys who brags about his "immunity to poison ivy"? It's as though his immune system is so robust that it fights off all those poison ivy toxins, leaving him rash free and full of machismo. Little does he realize that those rashes caused by poison ivy are in fact a type of immune response.

When the poisonous sap (urushiol) binds to skin cells, our body's T-cells initiate an immune response. The result is a form of contact dermatitis caused by allergic reaction. Typically, this response doesn't occur the very first time someone is exposed. People who react when exposed to urushiol have become sensitized to it. Ultimately, it's estimated that between 70 to 85 percent of people develop allergic reactions to poison ivy, poison oak or poison sumac.

Some people have greater degrees of sensitivity than others. That variable, along with the amount and duration of exposure, can cause a broad range of reactions. Generally, people become less sensitive to urushiol oil as they get older, which makes sense since our immune response tends to decline with age.

To further complicate things. A person's level of sensitivity can increase over time. Repeated exposure often results in higher levels of sensitivity. So it's best to avoid ANY exposure, regardless of how tough you think you are.

How to identify poison ivy

"LEAVES OF THREE, LET IT BE." That little rhyme can certainly get you started in the identification process. Poison ivy leaves are comprised of three individual leaflets, never more. But lots of other plants have leaves of three, as shown below. So you need to learn some of the subtle traits as well.

GLOSSY / SHINY LEAVES? Don't obsess over glossy leaves, expecting poison ivy to be coated in oil. Young tender leaves may be shiny and slightly red. But mature leaves often lack that gloss that an uninformed person might expect.

JAGGED LEAFLETS / THORNS? The edges of the leaves should never look jagged or serrated, as you'll find with raspberries. Instead, they should be fairly smooth with slight lobes, especially on the two outer leaflets. Additionally, poison ivy never has thorns.

HAIRY ROOTS? Poison ivy is a vine and will grow hairy roots along the stem if given the opportunity. But it will also grow easily along the ground, with little evidence of vine-like growth. There is one consistent trait that will help you though.

ALTERNATING LEAF GROWTH: As you look along the primary trunk or branch, you will see leaves stemming from each side. From the left, then the right, then left and so on. These leaves are never directly across from each other. Instead, they alternate. This characteristic allows you to quickly tell poison ivy apart from young box elder trees. See the photos below.

This poison ivy is hiding alongside Virginia creeper (which has also been known to cause rash). 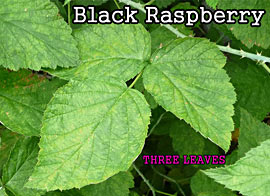 Leaves of Three (but NOT Poison Ivy): Black raspberry leaves may appear in groupings of three, but the sawtooth edges are nothing like poison ivy leaves. 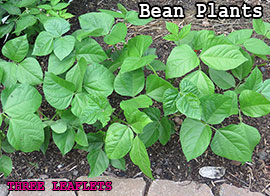 Leaves of Three (but NOT Poison Ivy): Legume, bean plants have three leaflets, but clearly they are not poison ivy. 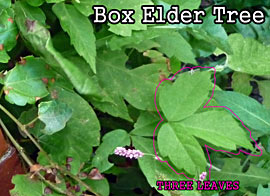 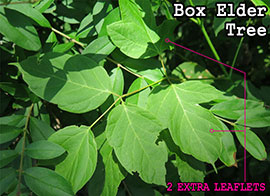 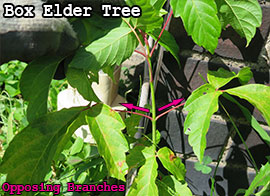 Box Elder Tree (Poison Ivy Look Alike): The opposing branches connect to the stem directly opposite of each other. Poison Ivy leaves are not attached in this way. 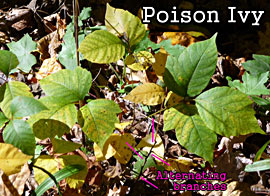 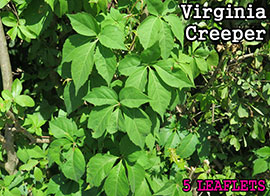 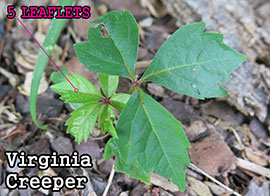 Virginia Creeper Seedling: Some leaves might only have 3 leaflets at first, but eventually it has 5 leaflets. 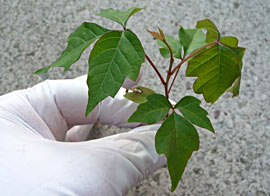 Once you know what it looks like, you'll be amazed at how many places it pops up. I see it all through my neighborhood. Spotting it has become a little game for me.

How to remove poison ivy

Now that you have a trained eye, you know exactly what to look for. This can help you when you are walking in the woods. And it will also assist you in your home yard or garden. Quick identification can lead to prompt removal. This is the key to avoiding needless misery later on.

SMALL SCALE: Removing small poison ivy plants is easy and certainly the best time to do it. It's easiest if you don't mess with it on a windy day. Keep all parts of the plant off of your skin, including the roots. Try to keep it off of your clothes. Wear gloves that are completely impervious.

For tiny weeds, I just wear brand new disposable latex / vinyl gloves. I avoid using any tools. As I pull each plant, I carefully place it in a plastic grocery bag. Then once all plants are pulled, I tie off the plastic bag. Next I carefully remove the gloves, placing them in a 2nd bag which is also used to double-bag the 1st one. Finally I tie off the 2nd bag and dispose of it in the trash.

MEDIUM SCALE: As weeds get bigger, you may need more muscle and more tools to get the job done. Tugging on bigger weeds could tear latex gloves. You could try wearing some cheap leather gloves over top of latex gloves. Then any oil that seeps through the outer glove won't reach your hands. Once you're done, the oil will persist, so I would throw away both pairs of gloves. For sure, you need to wear long sleeve shirts and pants. Use a trash bag and put the poison ivy directly into bags that get tied up.

LARGE SCALE: If your poison ivy plants are really big, I would seriously consider hiring a professional!

This sneaky poison ivy plant is growing in the middle of a hedge!

How to clean up poison ivy exposure

Do not walk in the house with your shoes on. Take off your garments and put them directly into the washing machine (with no other garments) washing thoroughly in warm water. Very thoroughly, you need to wash your hands and arms under cool soapy water. The quicker you can do this the better. (Hot water opens your pores and makes oil absorption more likely).

Assume that your gloves are covered in oil. Anything you touched while wearing them will be too. All tools like shovels and rakes need to be cleaned up. Handle them with a fresh pair of rubber gloves and wipe them down with rubbing alcohol. This will break down the oil. Wipe the soles of your boots or shoes with alcohol too.

USE CAUTION: Do NOT burn the poison ivy! The fumes are highly toxic. Don't compost it. You can spray poison ivy with weed-killer, but that won't destroy the urushiol oil. It remains active even in dead plants. So use extreme caution with this method. Do not mow over poison ivy. Never use a trimmer or weed wacker on poison ivy. The oil will spray all over the place, on your clothes, skin and tools. You will be sorry...

AAD: Poison ivy, oak, and sumac: Who gets a rash, and is it contagious? 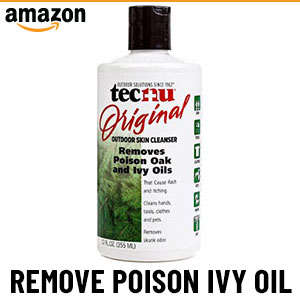 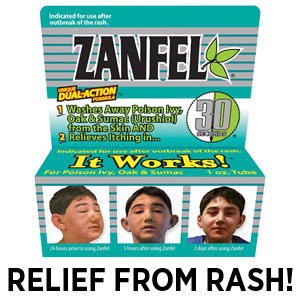 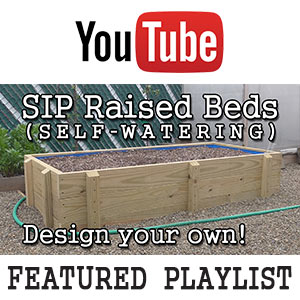 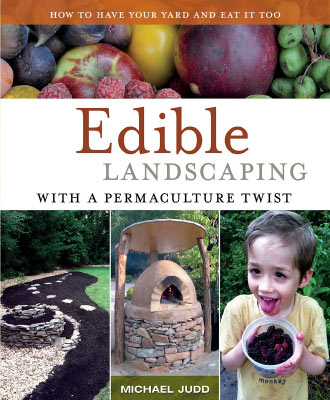 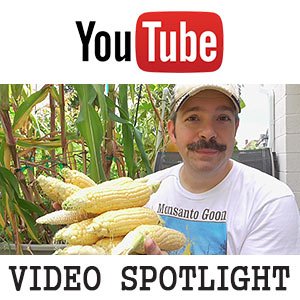 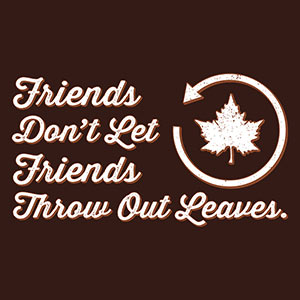