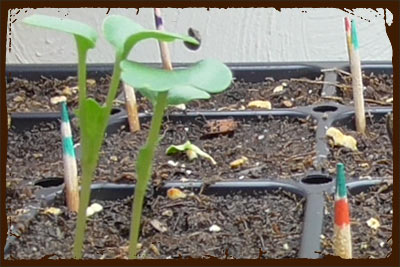 Are you new to seed starting? Perhaps you have been doing your research and you've been warned about "damping off". What is damping off? In horticulture, this refers to the effects of a seedling being overtaken by various soil pathogens. These fungi or fungi-like organisms can choke or girdle the stem of a young seedling. As the plant weakens, it often flops over and dies. Damping off can even effect seeds that haven't yet emerged from the soil.

This distressing scenario could drive us to take all sorts of preventative measures. Some methods are simply a waste of our time. Or they may even do more harm than good. Let's look at a technique that is touted by some as a necessary approach to avoiding plant disease. We'll see if perhaps a different mindset is beginning to emerge amongst many gardeners.

Why Sterilize or Pasteurize Soil?

THE CONCEPT: The background behind sterilizing soil revolves around the idea of killing off soil pathogens, weed seeds and other unwanted organisms. Through the use of high heat, solar radiation or some other means, it's possible to kill or mostly kill all microbial life in a soil or potting medium. With those sources of infection eliminated, a young seedling is free to emerge in a trouble-free environment.

Perhaps there is a level of legitimacy to this approach. Are you working with soil that you know is heavily infected with pathogens? Are you working in a lab, conducting a highly controlled experiment? But let's switch over to seed starting as a home gardener. Should soil sterilization be a standard procedure? We'll answer this in a moment.

How to Sterilize / Pasteurize Potting Mix

Firstly, let's just touch on a few key methods of soil sterilization that are advocated on the web. Picture yourself actually doing this. Envision what it might be like going through the whole process.

HEAT: Some sources recommend taking your seed starting medium and heating to a temperature that effectively kills all life. Small batches can be placed in a microwave. Larger amounts can go in a covered dish in your oven. Using a thermometer, you can heat these until they reach a minimum temperature.

Do you enjoy the smell of yummy, freshly baked cookies? Now imagine baked dirt... mmm. Also think of the energy used to carry out this process. Does this seem very "sustainable"?

SOLAR RADIATION: A more energy efficient alternative is to use solar power to kill off microbes. This is free, it keeps your home clean and it allows for large batches. Simply spread your potting medium out on a clean surface in your yard on a bright sunny day. Allow that UV radiation and fresh air to kill off all the baddies.

I'm not sure how effective this is. Wouldn't the soil need to be spread pretty thin? You may need to mix it a few times, breaking up all clods. I picture it drying out. And then a nice gust of wind comes along and... poof!

A Better Way to Kill Pathogens?

Through my experimentation, I've been looking at some organic methods of growing seedlings. I've seen excellent results from growing in free, highly sustainable resources. Finely sifted hot compost derived from a tumbler has worked well. Even better, is finely sifted red worm castings (aka worm poop or vermi-compost).

HOT COMPOSTING: Hot composting can reach temperatures of 130° F to 160° F! Over a sustained period of time, this effectively kills lots of microbes and seeds too. Interestingly though, soil life is not killed entirely. Rather than being left with a lifeless mass, you have a material that is brimming with microbes.

The difference is, they are beneficial bacteria and fungi. The original food source of those pesky pathogens is broken down. The pathogens either die off or they are simply out-competed by other, benign organisms.

VERMI-COMPOSTING: This technique uses worms to process organic matter. The worms will eat small bits of food. But what they really thrive on are the bacteria, fungi and algae living on the food surfaces. The worms actual eat these microbes. Pathogens that are eaten by worms are broken down and eliminated. All that remains is a highly fertile growing medium.

Both of these techniques use natural living forces to process organic, diseased matter. These approaches are energy efficient but also more effective than simple sterilization.

ANTI-BIOTICS vs PRO-BIOTICS: After decades of trying to kill off the bacteria in our human bodies, scientists are now seeing the damage that has resulted. A sterile microbe-free environment is a vacuum. It is a perfect breeding ground for the very pathogens you're trying to resist.

Instead, there has been a big push for reliance on "pro" biotics. Encouraging and fostering the growth of beneficial microbes is a strategy for combating the pathogenic ones. The good ones out-compete the bad ones. People are realizing this in managing their bodies. Could a similar approach work in horticulture as well?

PRO-BIOTICS FOR SOIL: In testing seedling mixes, I've observed vigorous, healthy seedling growth without sterilization. I was able to grow seedlings with no damping off in pure worm castings, pure compost and mixtures thereof. These mixes were loaded with microbes... the beneficial kind! As it turns out, researchers at Cornell have found that vermicompost can introduce beneficial microbes that colonize the surface of a seed, protecting against pathogens.

Moving into the retail segment we can see product lines that are emerging. For example, PRO-MIX BX BIOFUNGICIDE + MYCORRHIZAE is a potting soil mix that is inoculated with beneficial bacteria & mycorrhizae fungi. The "biofungicide" component might make you think of some sort of synthetic chemical. However, as described on their website: "Biofungicide is a naturally occurring strain of bacteria called Bacillus subtilis and Bacillus Pumilus (MBI 600). This bacterium enhances plant growth and combats harmful organisms such as Fusarium, Pythium and Rhizoctonia."

Although I find the product to be rather overpriced, examples like this underscore a different way of addressing soil pathogens. While there may be certain occasions that call for drastic measures, I never make it a habit of killing off microbial life. Instead, I recommend encouraging life. Introduce colonies of beneficial fungi and bacteria. Overwhelm and out-compete the unwanted organisms. Create an insulative layer of biological protection.

The Best Way to Prevent Damping Off

I haven't forgotten about our initial concern: damping off. The best way to fight damping off involves a two-pronged approach. Create conditions that: 1) discourage fungal growth and 2) promote strong plant growth.

MOISTURE REGULATION: Damping off results from unchecked fungal growth. So what can we do to slow down fungal activity? Much of it revolves around moisture. Over-watering your seedlings is the biggest culprit in this regard. Fungi thrive in dark, moist, humid, stagnant environments. Don't give them what they want. Avoid over-saturating your potting mix. Water from below when possible, without allowing your pots to sit in a puddle of water. And think twice about humidity domes. I personally stopped using them after the first year and don't plan on going back. If you do use one, I suggest removing it as soon as you observe seed germination.

STRONG PLANTS: A vigorous, healthy plant will be able to fight off invading pathogens. Yes, the plants need moisture. And of course they require a measure of fertility. But the missing element is often light. That's right. Weak light yields weak, spindling growth. Seedlings that are stretching are telling you that they need more light. Without it, they will be flimsy and will easily succumb to damping off. After 5 years of seed starting, I've come to realize that I only ever observed damping off in seedlings that had been weak and starving for light.